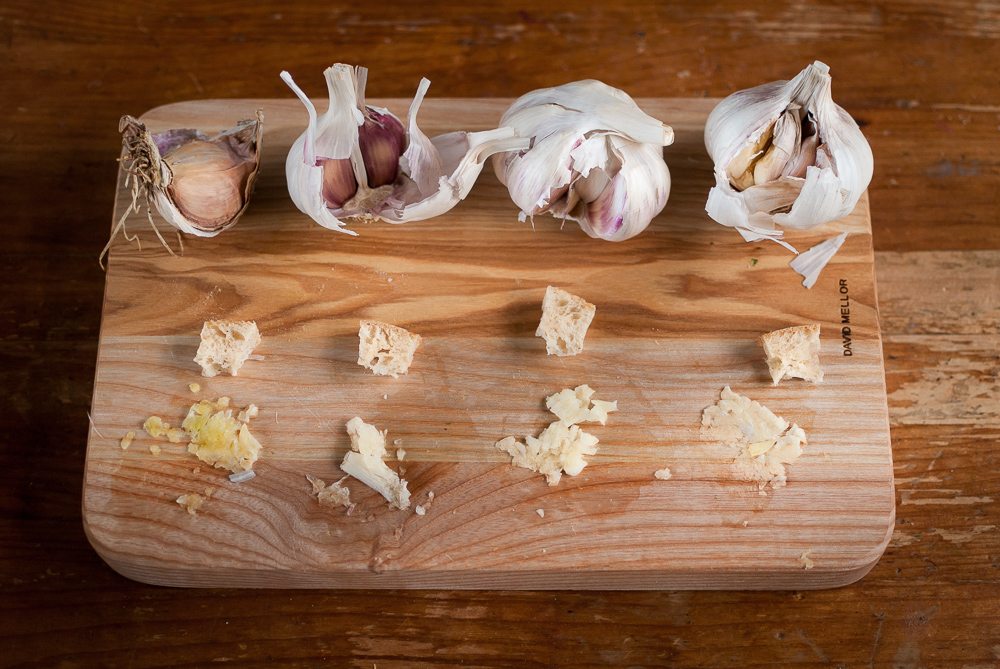 I am testing these four garlics to see which is the best for a pesto. I’m looking for a mild garlic. This may seem a contradiction of terms, but in fact there are subtle differences that can be detected. However, I should warn you, do not attempt this ‘test’ unless you are a culinary obsessive. Irrespective of actual nuanced characteristics of each garlic, by the end of the test your taste buds will be hammered into submission and begging for it to stop. I imagine a similar test would be to attempt to describe the flavour notes of chillies above 100,000 Scoville heat units. Hmm, you can really taste the fruit in this Trinidad Moruga Scorpion…

I could detect four taste categories in the garlic: aroma, determined by smelling the raw garlic; flavour, which in a raw state is fleeting as the next category takes over taste sensations – in cooked garlic, this characteristic will be more pronounced and give the classic ‘garlicky’ taste; pungency and piquancy, two similar sensations in the mouth and difficult to separate, otherwise described as strong, harsh, sharp, pepper, hot, burn, heat, acridity or astringency; finally, there is an aftertaste and perhaps the most important characteristic in raw garlic as this determines how long previous flavours last on the palate and whether they mellow and meld into new tastes.

Roscoff: This has very useful large fleshy cloves, the mashed garlic appears to have a weaker less dense texture than the other garlics, but in terms of taste, the texture of raw garlic is less relevant. There is a very good mild onion aroma, which continues as a flavour on the tongue, but quickly becomes bitter and hot, but this garlic has an interesting aftertaste, which becomes fruity, then nutty and mellows pleasantly. A definite contender for using raw.

Spanish: I could detect no aroma or flavour, but was hit with a piquant hot burn, quite astringent. Aftertaste becomes bitter and metallic without any onion flavour. This is all burn and not much taste, save it for cooking.

Lautrec: A very attractive garlic with especially uniform and easy to remove cloves. Winning so far on just looks and tactile appeal. Pronounced vegetable aroma, which turns to an intense onion flavour before the arrival of the sharp piquant heat of pepper. So far, this garlic has a strong taste of garlic with the normal heat sensations, but there is a surprising and lovely trick in store, it apologises for all that intensity and slowly seduces the palate with softer floral notes and then wanes into a mellow, sweeter really very pleasant and mild taste of garlic. Perhaps this is what we might expect from the French, eating a raw Lautrec is not only pleasing on the eye, but a tasteful and emotional culinary experience. This is the one for my pesto.

Italian: This smells of mild onion, but becomes very hot and peppery with an intense sharpness, rather too much intensity for my liking, it does settle down a bit and there is a good earthy garlic flavour which lingers, but so does the piquancy. Flavour is good, but perhaps just a little too powerful and lingering. Oh dear, sorry Italy, I’m going to have to go French for my pesto…