Annatto, the Most Versatile – and Unknown – Seed in the World 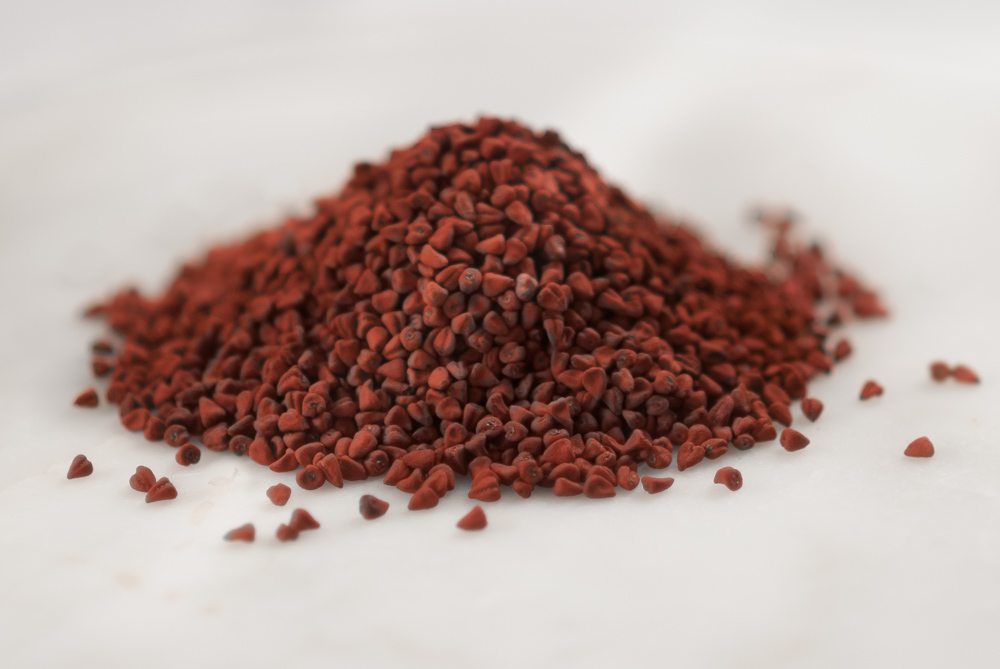 It’s hard to find good information on annatto, or ‘achiote’ as it is called in Mexico. I have a few Mexican cookbooks and they provide a few insights – and recipes. Otherwise, I’ve done some online research to see what I could uncover. Most blogs repeat the same interesting wiki-facts about it being used as condiment for cooking (e.g. marinating meat and fish), or as a dye (e.g. colouring textiles red) and as a colouring agent (e.g. colouring everything from butter to popcorn, hair oil to nail varnish, shoe polish to floor polish, and cosmetics to medical ointments). I’d like to know more about its use as a body paint by the native tribes of Brazil, presumably these tribes benefit from annatto’s natural sunscreen and insect repellent properties. We can only wonder if Mel Gibson’s actors in Apocalypto coloured themselves with annatto war paint.

It’s also used to colour lipstick. This gives the achiote tree its common name, the ‘lipstick tree’. Meanwhile, annatto is reputed to be a female aphrodisiac, so perhaps there is more to red lipstick than meets the eye? But, if this seed is so versatile, why isn’t it more popular and commercialised? Just imagine the advertisements: Buy annatto today – it’s a delicious marinade for meat and an insect repellent!

Spreading the remarkable seeds around the world

The achiote tree that produces the annatto seeds is native to the American tropics. The hard and irregular shaped seed is derived from small red fruits that nestle and sit protected inside wonderfully bristled conical pods. It’s no surprise the plant was considered treasure – it’s a stunning piece of biological design with seeds like dark red gemstones.

Annatto is especially present in Yucatecan cooking, where the seeds are ground together with other spices into a paste known as recado rojo. The paste forms the base of many dishes, including the regional speciality, pork pibil, a slow-roast braise cooked in banana leaves and most famously presented in its suckling pig variant, cochinito pibil (an example of which is illustrated as a happy red piglet on packs of El Yucateco annatto paste).

It is also used for culinary colouring and flavouring throughout Latin America and the Caribbean, particularly for rice, perhaps as an alternative to saffron. Spanish explorers carried the seeds to counties as distant as the Philippines where it’s cultivated on a small scale and used in many traditional recipes. It seems the Spanish also traded a few annatto seeds in Vietnam or other parts of Asia, as it is widely used in Vietnamese food and also appears in Chinese cuisine.

Painting the town red – or anything else for that matter

The colouring effect of the seeds can be seen by heating them in oil or water which produces a bright red colour. The usefulness of this natural and ‘safe’ colour is clearly recognised by the food industry who exploit it on an industrial scale. This can be confirmed by checking food labels for the ingredient ‘colouring (annatto)’ or its E number E160b on any red-tinted foodstuff.

The Aztec and Mayan civilizations thought the seeds so special they were considered sacred (being the colour of blood). But that didn’t stop the Mayans recognising annatto’s practical value as a permanent ink for writing their scriptures.

Most sources also cite the ancient use of annatto as a medicinal plant. These days such properties are being ‘heralded’ as the basis for claiming annatto a new healthy superfood, as well as a medicinal cure-all, able to treat – amongst other conditions – digestion, poor eyesight, weak bones, sexually transmitted diseases and cancer…

So, there we have it: annatto – you can write a letter with it, do the housework with it, dye your wardrobe red with it, varnish your nails with it, apply your make-up with it and use it to fight disease. But we suggest you start by putting it in this amazing achiote sauce here.